So you want to add some sort of networking functionality to your C# application?
Then this little blog-post is for you!
It doesn’t even matter if you’d consider yourself a noob because I’m about to make network code real easy for you.

Whenever you need performance (maybe you’re making a game or some other real-time thing) you almost definitely want a binary network protocol.
That means HTTP and all the other dumb text-based “web” stuff is out! 😛

What we need is an easy way to directly send binary representations of our objects TCP or UDP.

What do we want exactly?

Let’s say we have an object like this and want to send it over internet:

Starting with the final usage (because that’s where we want to end up), what is the most comfortable way you can imagine to send/receive that over the internet?
Maybe something like this:

Well the usage looks nice.
But what if whatever solution we come up with is slow? That’d be a real downer.

So in order for our network code to be truly considered compfortable there are some more requirements:

In the super-comfy approach we imagined we send and receive objects.
But the basic network primitives in .NET (Socket / NetworkStream) want bytes, not objects.

It turns out networking is (for the most part) actually a serialization problem.

There are a lot of serializers out there already for various scenarios.
And not only that, most of them have active communities, and a huge amount of work went into making them!

Spoiler alert: No, obviously not.

What do we want from a serializer that’d work for us?

I was searching for a serializer that does those things for years.
After all there is no reason it couldn’t be done in theory, it’s just that nobody seemed to have invested the time to actually do it!

While I was searching for that holy-grail of serializers, I either had to abuse JSON a bit or write some manual serialization code (yea it’s as boring as it sounds).
Then recently I worked on a project where none of those old workarounds would help – writing a better serializer was literally the only way.

Thus Ceras (https://github.com/rikimaru0345/Ceras) was created!
An open-source binary serializer with so many features that I literally had to move the feature-list to a separate page!

How does it look like in action? How does Ceras help? (Demo Project)

I made an example project, and for the impatient here’s a little screenshot so you know what you can expect: 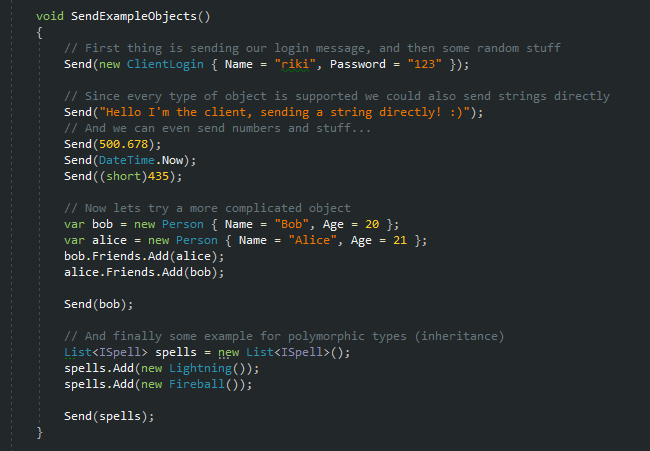 As you can imagine posting code on a blog only works well for small snippets.
Also what’s the point if you can’t run it yourself, mess around with it, etc… 😛

In ‘Part 2‘ of this post we’ll explore how the demo works, what we can do with it, and more importantly what we can’t do with it and how to successfully solve those problems using Ceras.

Then, in an upcoming post I’m working on, we’ll see how Ceras can help in an entirely different scenario (splitting objects).

To use Ceras in your own project:
1. Install the package from NuGet
2. Instantiate it var ceras = new CerasSerializer();
3. And then just serialize objects: var bytes = ceras.Serialize(person);